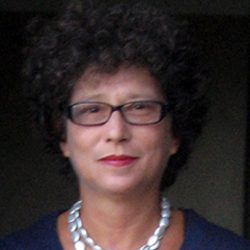 Is member of the Council of the School of Architecture Urban Planning Construction Engineering (AUIC) and, since 2012, Coordinator for the Course of Study in Architectural Design.

She has been involved in a number of research projects, focussing on the relationship between architectural design, city and landscape. Her principal fields of research are: Architecture for exchanging and industrial cities; Architecture and figuration of the public building; Architecture, sport, leisure and city.